I.  Introduction and Historical Literature Review
Throughout the World club football history, there was a chronological evolutionary change of competitions. The first professional football was formed in England 1892 while the amateur football was first ever established in South Americas a year later in Argentina but most of European and South American leagues turned professional in the 1930s. The limitations of football at the early era such as non-existence of international club competition, the irregularity of competition format and qualification, etc has left the complexity and difficulty for us to reach the status of each European club in its whole history.

The world club team all-time ranking[1]and The Worldwide historical club ranking[2] based on mathematics [Marcelo, 2016) ranks the team based on titles criteria which is set the standard points of title acquisition between the leagues and the point given to any league are equally given between seasons. By this context, there is no proven source of standard point and not represents the actual fluctuation of the league/international cup standard from era to era. The evaluations were also not differentiated the performances to achieve the round or title.
Accordingly, this work’s objective is to study, integrally regulate and standardize the system of the entire Latin American club history for the evaluation, including all performance characteristics (win-draw-lose, goal difference, place, round and trophy) against the determined standard of competitions within the designed system of methodology conformed to the existed format or condition at any point of evaluation.

Then, the performance will be adjusted +0.75 and x 0.85 to give positive value for negative raw data.
1.5) The total performance = SQRT(STS X ADRT)

4) Final Calculation
Basic Proportional Weight : Domestic League 52 %, Domestic Cup 16 %, Int. Club 32 %    The performance is calculated in aggregate within a season not separated since the performance between competitions were a mutual dependent factors as football is purpose to mainly win the trophy not optimize the performance in any of competition level. As many of competitions are tournaments formats, it is implemented and calculated in aggregate mini-leagues method. For the season without domestic cup, basically the domestic league proportion is expanded to 60 % and increase more 16 % in non-international club era. Exceptionally the league proportion could be increased between 77 at minimum and 80 % at maximum by compensation from over number of participation (> 38 to 46 games per seasons).  However, if the obtained performance is a negative value, it is not applied to the system and equal to Zero. That mean the lowest value to apply for the system has been standardized.
To standardize the opportunity of international club participation. The standard value of league performance at 3.25 has been set. The clubs that achieved this value but not get the opportunity because its league is competitive, will be compensated the higher proportion for domestic competition by 50 %. In contrary, the clubs that got the opportunity to play in international club with less than 3.25 of league performance in the previous season will be deducted the entire seasonal int. club points that is less than 2.5 in the over-participated number
The obtained seasonal performance will be matched to multiply with proportional weight of the best 92 seasons whose number is an average of available league seasons for the 50 qualified teams and calculated the sum to obtain aggregate total.
The trophy bonus is designed in the following table. 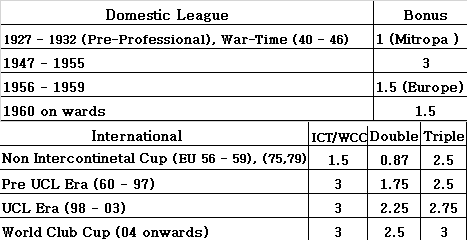 The league trophy bonus is given for only the club achieved the highest league point among national leagues in each season. The winners in the periods of 1927 - 1932 (pre-professional era) and 1940 - 1946 (war-time) are given bonus in less value than normal period. The domestic cup is not applied as a single bonus as the continental international cup has represented the teams in elimination format. However, it is applied for double and triple trophies if the club won International competitions and also won domestic cup. The International bonus is applied only to the winners of Intercontinental Cup/World Club Cup in its existed years. For the year without World competition, the winner of Europe and Latin American share the bonus by half of each.

5) The Decisive Factors
0.2 % is required as a minimum value to unanimously decide the rank. If not, consider if the comparison couple has the other seasons than average, if so, compare its other best season by one. 0.1 is a minimum value to beat, if not, consider another season until match the rule. In case of no other season, the peak season is a decisive value with a minimum 0.1 to significantly differentiate. If not, recomparing in the second peak season or more if necessary.
III. Implementation
The best 50 clubs from European and South American lists are rearranged. Previously, 103 European and 51 Latin American clubs are selected for implementation by considering number of available seasons and the entire finished places. The implementation was done by excel formula database by manual input and correction checking. All related Latin American seasonal league tables are calculated for the club performance and standard of competition. All related cup competition games are count for the goal difference to determine competitive level. Finally, all performance and standards result are input the conclusive table. Each club are input the performance data in each part of competition and calculate for the aggregate seasonal point by competition-level proportional weight conformed to the actual condition at the time.
The unavailable record : Paraguayan League (1906 – 1991). The Paraguayan clubs are ranked by international performance comparison against the estimative opportune factor of participation. Czechoslovakian Cup 1960 – 1970, Czech and Slovak Cup 1971 – 1980 ; Hungarian Cup 1934, 1935, 1941 – 1944, 1952, 1955, 1958, 1965 – 1968. For these related years, the competitive level is set by estimation. Ferencvaroc rating is effected little as there are the club result record. In the case of record unavailability, the case is equal to the unavailable competition that allows a higher portion of domestic league.

The 50 Greatest World Clubs of All-Time

Statistics by nation (also ranked by performance if equal in number)

Best League Performer in the World by Season 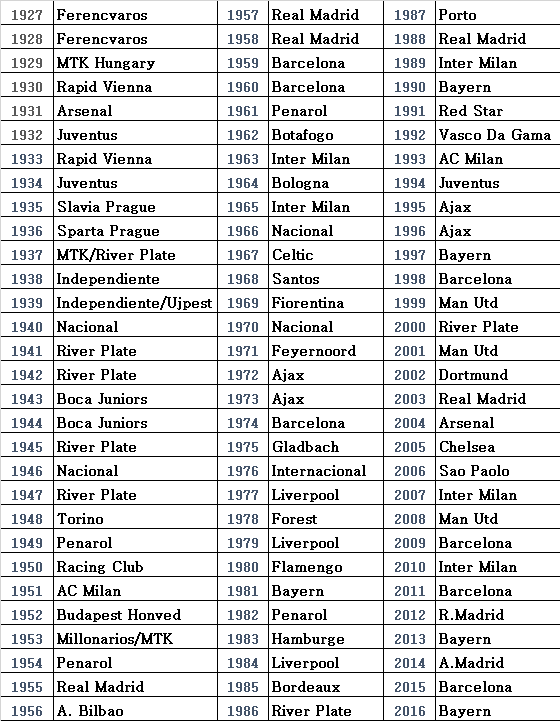 The methodological implementation allows the rankings to have represented the clubs’ entire performances against the determined standard and greatness throughout the history. However, the qualitative analysis to determine top level performance of the best club in international competitions between seasons and eras are provided by author’s cumulative tacit knowledge converted to mathematics that is always debatable but the scale of tolerance is however quite narrowed, possibly effecting on the change of rankings in a minor part. Additionally, the proportional criteria between parts of evaluation and the proportional weight given to highest to lowest performance has a main role to finalize the ranking.
The seasonal weight applied to the seasonal rating reduces the disadvantage of the teams that participated in lower seasons than average group in case of achieving a competitive high peak and the teams participated in more seasons than average group is just advantageous as they had more opportunities but the number of calculated seasons is still limited in average value.
The result of implementation saw Real Madrid unsurprisingly ranked as a number one of the World. Barcelona achieves the highest peak by aggregate season. Penarol is the best Latin American representative and their only one appeared in top ten. Estudientes and Ujpest are narrowly beaten by Feyenoord as the last 50th place.