I.  Introduction and Historical Literature Review
The international country football history officially began at the 1908 summer Olympics’ football tournament although all participants are from Europe. Football tournaments at Olympics games in the pre-world cup era between 1908 and 1928 are generally considered as a world stage of competition until the first ever World Cup was established in 1930.
The World Football Elo rating[1] is a ranking system to calculate national team performance based on every official matches played, invented by Alpad Elo and implemented in 1872, with a formula that includes various football competition parameters are marginal victory coefficient, level between competitors, importance of matches and finally concludes the ranking of nations by month. The FIFA World ranking system[2] was followed in 1992 with a similar factors of formula to Elo Rating. However, these two systems allows the performance in friendly matches to take advantage although the game is just an uncompetitive trial playing and the game result is meaningless in historical status. Also, the determination between competitors level from previous result could be highly erroneous when the fluctuation of team performance is commonly existed within a single tournament.  Importantly, there has been none of all-time national teams ranking works established to date.
Accordingly, this work’s objective is to study, integrally regulate and standardize the system of the entire international country history for the evaluation, including all performance characteristics (win-draw-lose, goal difference, place, round and trophy) against the determined standard of competitions within the designed system of methodology conformed to the existed format or condition at any point of evaluation.

1) International Major Tournament
Aside from the actual participants in historical tournament, there are some additional participants in the expansive remodel of competition to standardize the opportune factor between era based on qualifying performance but the additional teams will be given the performance rating just 50 % in comparison to actual participant. The number of additional teams is considered from minimum standard value of qualifying performance and level of participants in qualification round in specific years. The finished round is extended to the existed round and is also based on the ranking of their raw direct performance.
1.1) Determine the winner of each major international tournament by qualitative analysis.
1.2) Determine the competitive level by counting goal difference to calculate its average for each round and input by the following formula ;
(∑ Goal Difference Average/(Number of Round x 4.5))
(Number of Round +((5-Number of round)/2))/5
The standard of competition (STD) = Top Level X Competitive Level
CC = Competition Coefficient (World Cup = 1.2, Continental Cup = 1.1)

The obtained tournament performance partition (OPP) =∑ TP x PRT
; PRT = Periodical Ratio between Periodical Coefficients (4 years = 2, 3 years = 1.5, 2 years = 1. 1 year = 0.5)
OPP will be matched to multiply with proportional weight whose number is an average of available tournaments between continents.
Each sum of competitions’ performance are aggregated as a basic total score.
The trophy bonus is given for only the winner in World tournament and designed as following ; World Cup since 1934 : 3 point, 1930/1950 World Cup :2 point, 1920/1924 Olympic Games : 1 point, 1928 Olympic Games : 0.5 Point

5) The Decisive Factors
0.1 % is required as a minimum value to unanimously decide the rank. If not, consider the aggregate peak value at 0.05 is a minimum value to significantly differentiate, if not, consider second peak partition or even more until match the rule.
III. Implementation
The performance result in continental ranking in this paper http://xtravictory.blogspot.com/2015/10/nt-evaluation-result.html is standardized of opportune factor in continental competition and rearranged to establish top 50.

The 50 Greatest Football Nations of All-Time 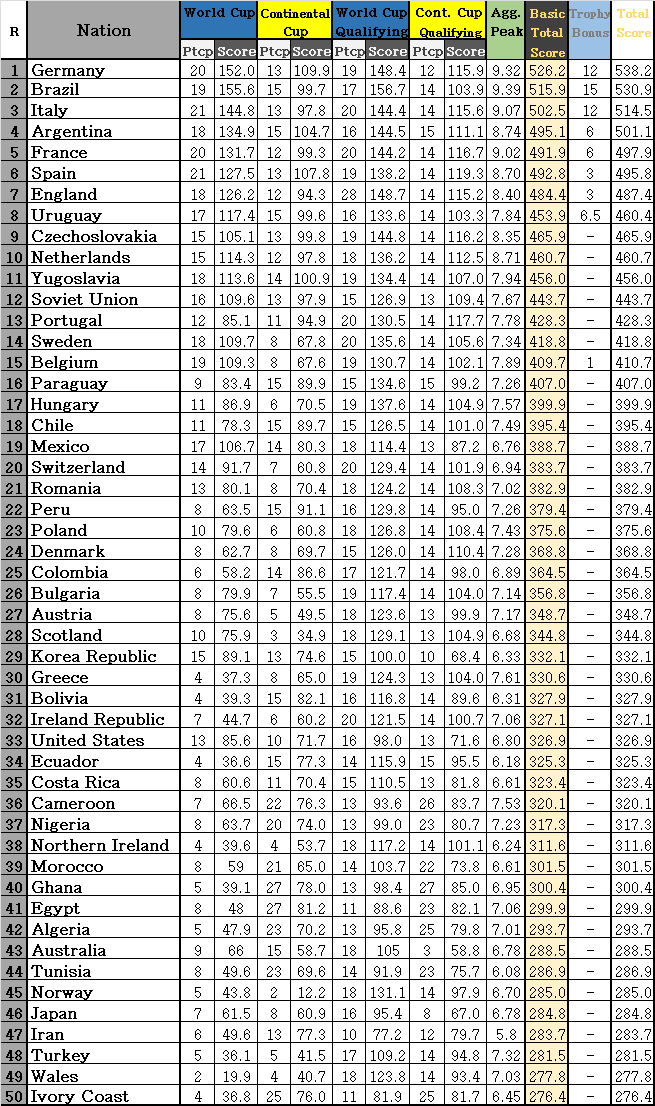 V.  Discussion
The methodological implementation allows the rankings to have represented the countries’ entire performances against the determined standard and greatness throughout the history. However, the qualitative analysis to determine top level performance of the winner between tournaments and eras are provided by author’s cumulative tacit knowledge converted to mathematics that is always controversial but the scale of tolerance is however quite narrowed, possibly effecting on the change of rankings in a minor scale. Additionally, the proportional criteria between parts of evaluation and the proportional weight given to highest to lowest performance has a main role to finalize the ranking.
The partition weight applied to the tournament rating reduces the disadvantage of the teams that participated in lower tournaments than average group in case of achieving a competitive high peak and the teams participated in more seasons than average group is just advantageous as they had more opportunities but the number of calculated tournaments is still limited in average value.
Germany appeared as the all-time best country ever, having unanimously surpassed the second place Brazil by 1.7 % of point when the highest aggregate peak ever is pertained to Brazil. The key factor effects on Brazil’s defeat is its performance in South American Championship/Copa America, having won the title only 8 times from total 45 and the nation often sent B-team to participate in the continental tournament. In all-time World Cup performance ranking, Brazil is still the number one.
The European nations dominate the top 50 ranking as 23 of them are included in top 30. Czechoslovakia surprisingly beat Holland and Uruguay at 8th place thanks to its consistency. In the peak years, Holland and Uruguay performed in a much higher level. However, Holland in the pre-1970s can be classified as a below-average team in Europe and the same status in the additional period between 2016 to date. Uruguay’s related peak years were existed in the early era of football that is less competitive than the second half of the century.
As the methodology is designed to control the limitation of opportunity in major international tournament to save the actual quality, it allows Israel to appear in the ranking. Additionally, the greatness within a specific continental zone is saved as the evolution of football was progressed in absolute different conditions and incomparable developing rates. This protects Asian and African teams from being devalued when its performance was out of the competitive group in world competition.