I. Introduction and Historical Ranking Review

The football game is the sports competed by teamwork. It is anyway undeniable that the extraordinary individual footballers who performed and made a high impact on the team is one of the main attractive identities of football. Although football game’s main purpose is to win the trophy, the annual awards have been given to players indicates the social value on individual performance. Moreover, the discussion about all-time best players are widely interested and popularized among football fans while none of official historical awards was ever held.

IFFHS Player of the Century[1] Election in 1999 that was based on polls of journalists and former players but no specific detail are revealed. World Soccer Magazine[2], conducted the polls for its reader and applied the points for voting points. As the votes is just depend on personal view or criteria of the voters, the large different factors were distributed within a poll result that is eventually unable to conclude the status of the best and the biased selection is commonly existed.
Association of football statisticians (AFS) made ranking by considering goalscores against match plays and position for forwards and midfielders, the matches without conceding a goal for defender and goalkeeper and matches to play as captain including titles won. However, the result is noticeable that standard of competition against those statistics are not applied and some quantitative attributes are goal conceding and titles is characterized as team performance.
There is none of the historical ranking works based on performance evaluation found. Thus, this work is attempted to study and evaluate all-time best performers in overall career by complying and analyzing the verified secondary evidences such as awards, media rating, quantitative statistical analysis or even valuable interpretation or surmise from articles/discussion and applied to the methodological implementation to establish the all-time best players ranking by individual performance of all positions combined.

The methodology is summarized from the full procedure in
http://xtrahistory.blogspot.com/2013/01/Rating-Methodology.html


1. Individual Performance Classification
1.1 Domestic League
Total Average Rating = (∑ Match Rating)/Total Match Played
Amount of Performance : Domestic League Season is calculated from ratio between games played and total seasonal games.The performance is considered and will be updated in every half of season. In general case, 85 (more than 40 games) - 90 % (30 Games) participation is considered as 100 % amount and proportional calculation is required in less participation. Exceptional case : if any league game is available equal to or less than 30 games, it will be calculated base on ratio between games played and 30.

The method is designed in purpose to set the weight between performing classes. The peak amount will be calculated based on higher coefficient and descend for the lower ranks of class. The performance amount is controlled by standard value. Thus, any surplus (in some area) or deficit will be conducted to the rating result.

* n value in ∑ Sequence Coefficient is considered base on standard of participating frequency consists of frequency of competition held, ratio between qualifying teams per all teams in the competition and importance of tournament in term of rotation policy.
Performance Class Coefficient Table

The player ability attribute is evaluated through skill evaluation project (http://xtraimmortal.blogspot.com/2013/04/Total-Skill.html). The total ability rating will be calculated based on weight criteria that is set from value analysis.  (The criteria weight is showed in scorecard divided into attacker and defensive player position, the multi-functional player will be subjected to his best ability function). The value analysis is the determination of difficulty level between ability attributes with the factors are the quick and intelligent thinking, the elaboration, the risk level of mistake and the options.

2) Greatness : Players who created historical value with exceptional influence on his team will be obtained bonus 1 – 3 points depend on level of historical impact.

6. Conclusion and Classfication of All-Time Performance


LSP Definition : The All-Time Individual Performance will be also deducted the point base on the amount of failure performance in the case player failed to sustain average standard in exception of injury and other approved reasons within specific period as below condition.

Classification of players’ performance by season for club part or by tournament or international part from direct/indirect evidences of rating and calculated the rating point that is at least in international-class range with participating quantitative value in partition unit. Then applying proportional weight from highest to lowest and applying positional coefficient for goalkeeper and defender. Then, bringing the points in each part of competition level to combine based on given proportion by the given conditional criteria to calculate for the basic score. Additional trophy/historical/age bonus, performance state and total ability are totally calculated.


The Greatest Footballers of All-Time

In seasonal rating, the seasonal year shows the year of the 2nd half season such as 12 means (2011 -2012 season). Amount of performance is also considered based on appearances. 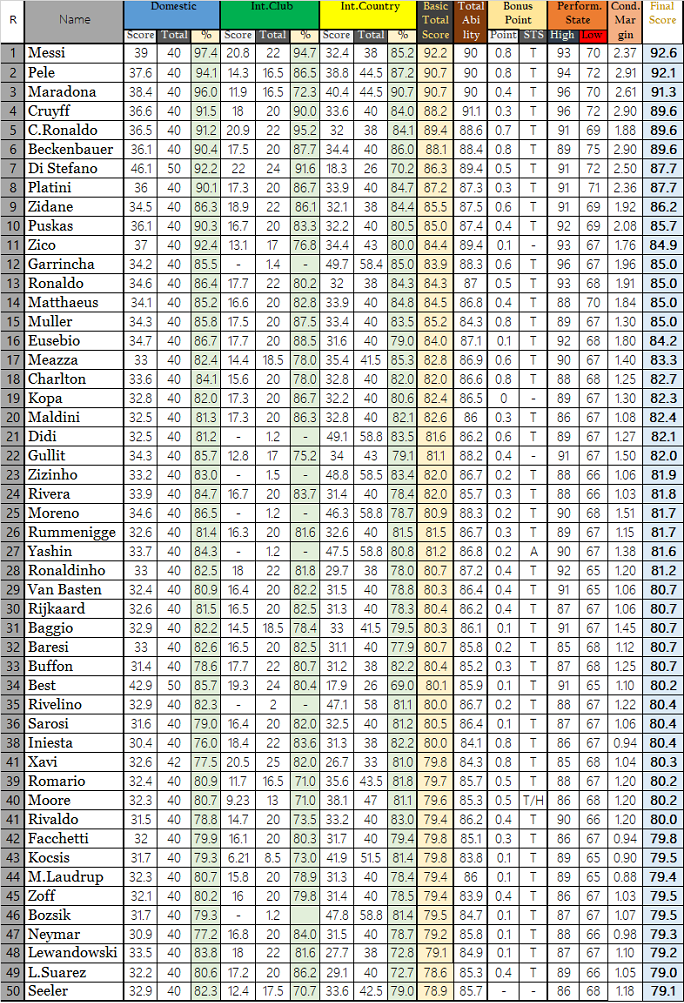 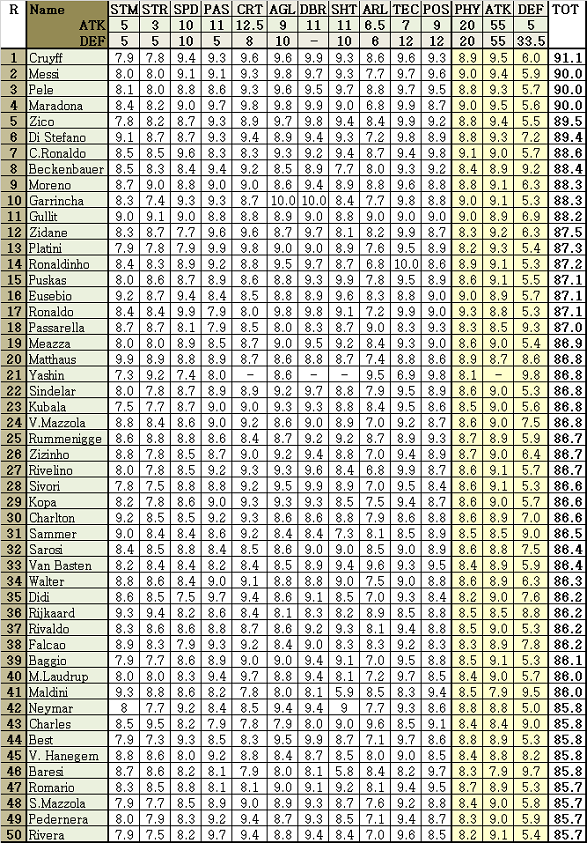 The Greatest Domestic Footballers of All-Time 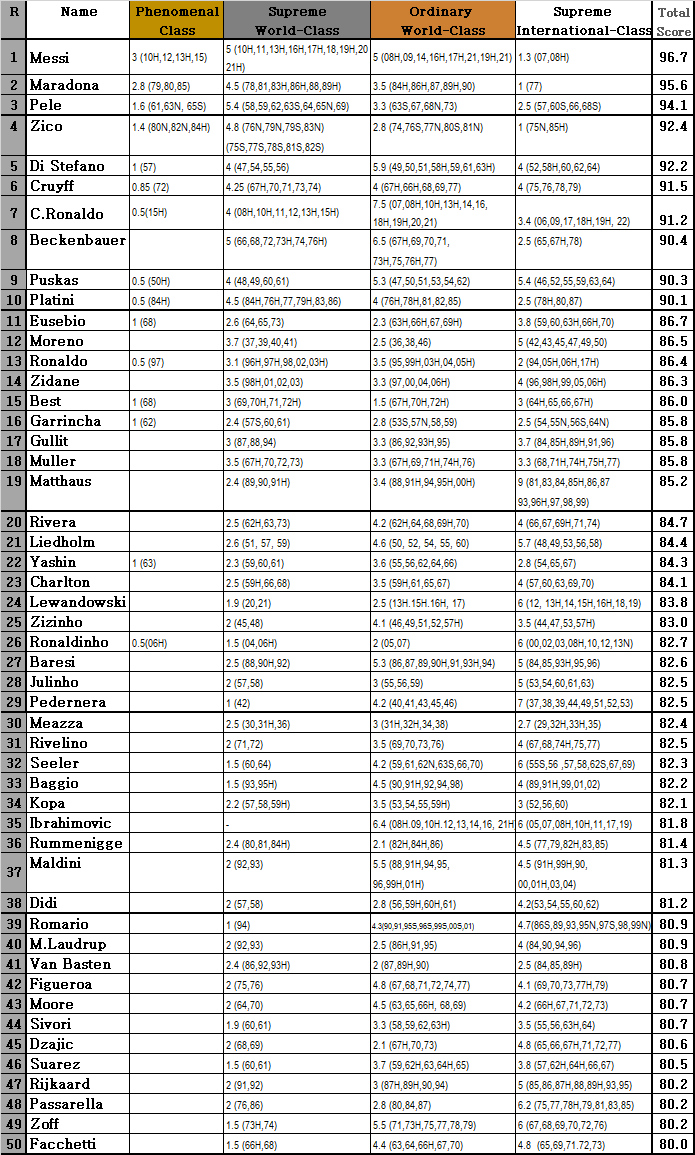 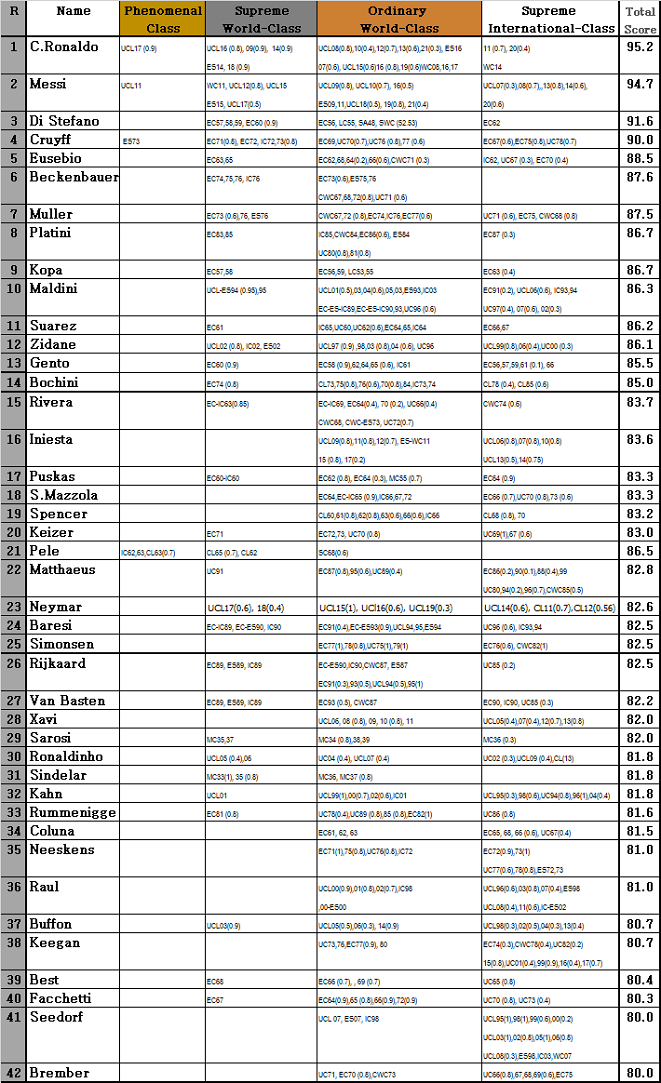 
The methodological system is designed to find the commensurate solution between peak and consistency of players’ entire career performance by applying proportional weight, covering all conditions and circumstances throughout history and the opportune limitation of players’ participation is also categorized and standardized. The performance is counted only equal and above international-class as the various lower levels are considered not significant in group of consideration. However, the surmise and interpretation on the restriction of secondary evidences is inevitably biased. By this context, the qualitative evaluation for input the system is unscientifically approached but highly involved with value definition created by social value.


The study with almost all experiments suggests Messi has become the best footballer of all-time with significantly better than his predecessors Pele and Diego Maradona. Lionel Messi is the greatest domestic footballer of all-time and also the best club performer ever. He has sustained as one of the best players in the World in 12 years while Pele was the best or one of top players in the World only 8 years. In 2nd half 1960s, his performance was significantly decline and also his team did not participate in 1967 Copa America and 1964 and 1968 Copa Libertadores Cup despite entitling to enter. However, if analyze his chance to win more Copa Libertadores, he would have won another title in 1959 if the tournament was existed. Other than that, Santos wouldn't be eligible or he was not in his top form or injury.  He could be regarded as the best player of the World Cup tournament in 1970. Although Pele never played in Europe, the standard of Brazilian national league or Torneo Rio Sao Paolo is comparable, He had estimate 8 world-class domestic seasons. Pele has a higher productivity ratio in National team football than that of Messi but Pele is less influential if taken number of team productivity into account and this represents how was Brazil encompassed by top stars. Maradona proved himself in a higher standard of competition in Italian Series A. Internationally, Maradona has an obvious advantage in national team career when he achieved a higher influential level on Argentina in World Cup, is rated as the best player ever in international country part. However, the decisive part is Copa America and international club stage where Maradona’s team were often eliminated in the earlier rounds and also did not participate in several seasons as his club did not qualify.
Johan Cruyff is rated as the player with highest ability ever but his prime career that he led Ajax to dominate Europe during the early 1970s is too short and his career in Spain is rather decline significantly. C.Ronaldo is likely to stay 4th place at the end of his career, has surpassed Johan Cruyff Franz Beckenbauer is the most consistent players in every level of competition he played but his prime is much inferior to the group of best ever. He is rated as Bundesliga best player by kicker in only 6 years, being rated below Vogts in most of years during 1st half 1970s.
Di Stefano has an outstanding club career consistency and longevity. However, He failed to lead Spain qualified for 1958 World Cup and was injury in 1962 tournament, is a big flaw prevents him to be rated among the best ever and is even controversial to beat Platini. Platini is clearly superior to his contemporary candidate likes Zico although his skill is unanimously inferior to Zico as he has a great international career. Puskas was suspended from football 2 years between 1956 and 1958 interrupted and effects continuity of his career and after moved for Real Madrid, he switched to play for Spain in only a few matches. Zidane is rated in the similar level of performance to Zico but get higher place as a preference of international recognition.
The three Brazilian consists of Zico, Garrincha, Ronaldo is very equal to be the second best player ever for their nation. The study suggests Zico has the most advantageous in domestic consistency among them and he has superior ability to the other two. Matthaeus is the most consistent player ever that allows him to be competitive against other high talented players although his peak is very short. Although the system give a higher weight from the peak descending to the decline, Marco Van Basten, George Best, and Ronaldinho were evaluated below top 25. The large number of disappearances affected on their longevity is a main reason for the first two and the long decline period of inconsistency for Ronaldinho.


The best goalkeeper ever Lev Yashin also appeared below top 25. He was not successful in World Cup by his own standard. Paolo Maldini, the best pure defender ever, beat his senior Franco Baresi by greater international opportunity even Baresi’s peak is rated higher. Stanley Matthews become the most overrated player ever when he is often voted in top 20 players of all-time although he just became a regular starter of England lately at 23 years old and then the war prevented him from football for 7 years. He came back impressively if consider his age but achieve very little with his club and he never became star of World Cup that England was failure in related tournaments