World Annual Awards of The Century


The First Official World Player of the Year award was just established by FIFA in 1991 elected by national team manager and captain. The unofficial world player of the year was started in 1982 by reader voting.


The objective of this work is thus to establish the annual best three World players of the year by evaluation system that ranked based on systematic rating of performance in three major competition likes Domestic Club, International Club and International Country in Seasonal Year or Calendar year, starting from the beginning of domestic club season and ended within July which includes international tournament (In example for 2000 -2001 season is belonged to year 2001 starting from Series A first game and last in the 2001 FIFA Confederation Cup). The list starts from 1930 and the only exclusion of period between 1943 – 1946) due to World War II interruption.


*In case of entire absence in any international competition, the loss portion is 25 % and rest of 75 % is equitably distributed to available part based on the current proportion. For partial absence or disqualification, the ratio between loss portion and compensation is 50:50. 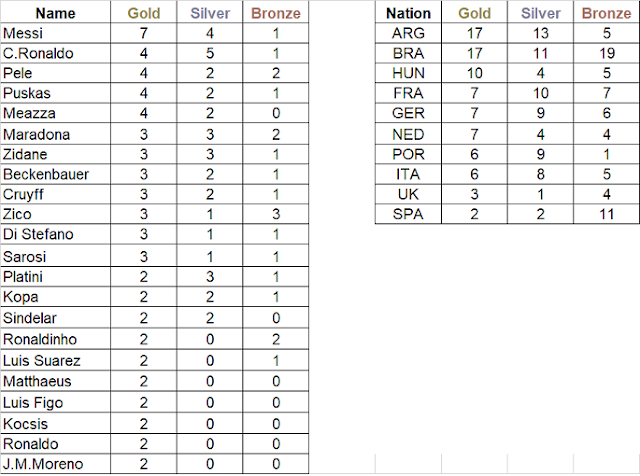 The systematic criteria of rating facilitates calculation of the approximate qualitative performance against the amount of playing and the level of competition. Definitely the qualitative performance that is evaluated by watching, awards and stats is debatable. Furthermore, the competition level criteria is one of the main factors in the evaluation. The system deduct only 25 - 50 % of criteria point if player didn't participate. Players who performed at the best level is not always finished the first place if they’re lack of opportunity to prove themselves enough in higher level international competition.

Due to the fact that competitiveness of candidates between years is varied. The table of medal can represent the best players in their own era only. Lionel Messi finished the first place in the table partially because his era is less competitive than that of Maradona who won only three times against the best candidates like Zico an Platini for example. Eusebio is evaluated to have never won best player of the world in any year. Eusebio’s best year in 1965 is unfortunately beaten by Pele and Van Basten who won 3 Ballon'Dor, won only one best player in the world in this list.
Lionel Messi become the best profile in sustaining as the best player in the world or one of top 3 best players with 12 years appearance in top 3. Pele appears only 8 seasonal years due to his decline performance in Brazilian football during 2nd half 1960s and limitation of opportunity to participate in international football including 1967 Copa America, 1964 and 1968 Copa Libertadores Cup is a main factors impede him from proving his consistency of peak in the international stages. Maradona also appears in top 3 for 8 seasonal years but is considered as the best player in the world only 3 times due to highest competitiveness of era with high profile candidates likes Rummeingge, Zico, Platini, Gullit and Van Basten. Maradona also decline in his performance in the late 1990s when he wasn't the best player in the world in any year.
The competition level criteria effects on both Van Basten (1988) and Ronaldo (2002) who performed superbly in European Championship and World Cup, respectively but they participated very low amount in domestic competition and prevent them from achieving the level of top player in the World.
In 1930, there is no Uruguayan player appear in top 3 despite winning world cup trophy as the standard of competition is even considered to be lower than Central European International Cup that was competed by majority of top teams in Europe at that time. All winners in the 1930s come from Central European nations due to the dominance of Mitropa Cup and Central European International Cup.
The war-time years is included in the list between 1940 - 1942 when the majority of European leagues remained running its domestic competition (Only England, Scotland and France were interrupted by World War II) although the average standard of competition had gone down while the La Maquina" River Plate was spending their golden era led by Jose Manuel Moreno and Adolfo Pedernera.
In the post-war era, Hungarian players dominated the world football and win 6 years within the first 8 years and all top 4 players in 1952 are Hungarian. However, the next era (2nd half 1950s and 1st half 1960s) saw the most glory era of South American nations with the peak of superstars like Di Stefano, Pele and Garrincha and totally won 9 years from total 11. It is noticeable that South American players won in all three places in 1961 as the only year to have such a dominance. European nations return to dominate, winning 10 years from total 11 between 1966 - 1977. In 1976, Elias Figueroa is a strong contender of Zico in the third place but he is lack of international participation and if he make the list, all three winners are defender.
Between 1988 and 1996, the majority of winners are from Italian Series A and the winner is a defender in two years and five defenders appeared in top three. Since 1997, almost all winners played in Spanish La Liga, only three of them played in other league. It is noteworthy that there is only player from the champion of international country major tournament is a winner (Cristiano Ronaldo in 2016) since 1998 as UEFA Champion League became a main important competition in modern era of football. Prior to 1998, most of winners are from the nation won the title in World Cup or UEFA Euro.

Status of Awards
The Most Competitive Years (In Top Three Players)

The Most Competitive Years with other candidates

The Most World-Class Year Performers


The Most Consecutive World-Class Year Performers

The Worst Players In Top Three